The White Buffalo Announces New Dates in Europe for 2018 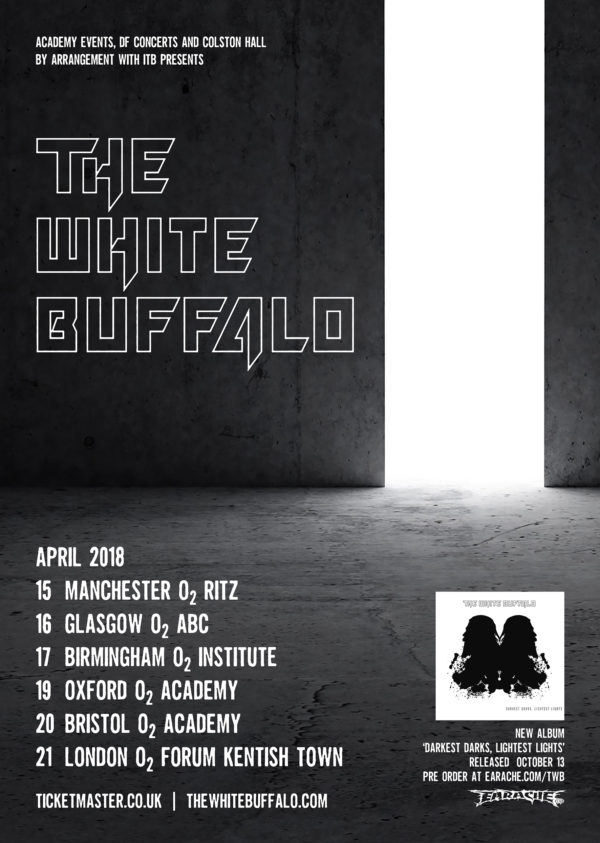 THE WHITE BUFFALO has announced a run of UK and German dates for April 2018. A UK presale starts 9 a.m. Monday 31st July, with tickets on general sale from 9 a.m. 2nd August via Ticketmaster. Tickets for the German shows are available now from MyTicket.

Bundles will also be available for the UK shows, offering fans tickets along with a pre-order of THE WHITE BUFFALO’s upcoming new album, ‘Darkest Darks, Lightest Lights’ on their choice of CD or vinyl. Albums will be sent out in time to arrive with customers on the release date.

THE WHITE BUFFALO a.k.a. songwriter Jake Smith last toured Europe in 2016 which included playing a sold out Shepherd?s Bush Empire to an ecstatic crowd, and a raucous set at the Ramblin? Man Fair. You can watch a performance on Jimmy Kimmel Live here:

THE WHITE BUFFALO recently revealed details of his sixth full-length album ‘Darkest Darks, Lightest Lights’ to be released on October 13th 2017 via Earache Records. The first single from the album, “The Heart and Soul of the Night” is now available on iTunes and other streaming services. Listen to it here: http://youtu.be/5er73c12d_Y

Smith has resolutely charted his own single-minded musical course for more than a decade. ?His captivating live presence and workingman’s approach to his craft has earned him a loyal fan base worldwide. In 2015 he released ?Love and The Death of Damnation? an album that prompted Q to note that “Smith’s capacity to tell tales and evoke atmospheres remains undimmed” and that he was” a turbo charged Bruce Springsteen, equal parts brain and brawn”. Uncut thought it was “A rich composite of Eddie Vedder and Steve Earle…impressive” and Classic Rock that “The music is audacious…a mix of hardcore country, southern rock and deep soul”. Total Guitar cited it as ?Superbly crafted acoustic Americana”.

Over the course of five albums, various EPs and numerous prominent placements in such high-profile outlets as TV’s Sons of Anarchy and Californication, Smith has built a powerful body of work that marks him as a genuine original. ?The California-bred artist writes timeless, vividly detailed character studies, tapping into the emotional lives of various misfits, outsiders and troubled souls with insight and compassion. ?His songwriting is matched by his rough-hewn, deeply expressive voice, and by his distinctive instrumental arrangements, which are simultaneously intimate and epic.

The album is also available to pre-order now on iTunes, including an instant download of the first single, ?The Heart and Soul of the Night?, at http://bit.ly/ddll-itunes