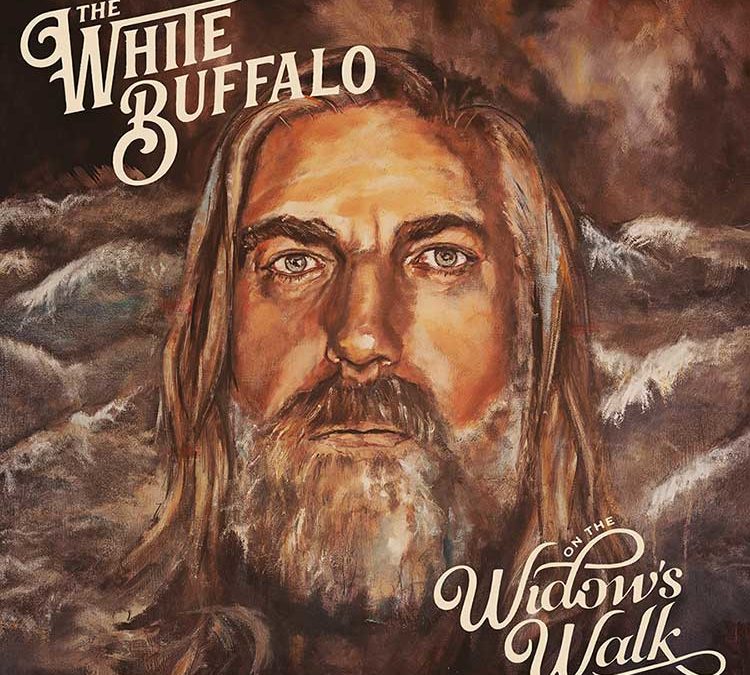 ‘On The Widow’s Walk’ is the new studio album from The White Buffalo, the touring and recording persona of Jake Smith – US singer, songwriter, guitarist, teller of tales; the Emmy nominee whose voice – a timber-shakin’ baritone of gravitas and gravel – seems fuelled by a greater truth.

Of the half-dozen albums thus far released under The White Buffalo banner, this latest 11-tracker – a loosely linked collection of dark thrills produced by Shooter Jennings, who also provides piano and keys – is the most collaborative and organic, the most sonically round.

‘On The Widow’s Walk’ is available to pre-order from February 21st, signalling the start of a new worldwide relationship with Snakefarm Records, a young label within the Universal Music Group spotlighting roots, country rock, blues & Americana.

From the beginning, Oregon-born Smith has wilfully side-stepped genre, touching on a variety of musical threads – from Americana to punk, from brooding folk to driving rock ‘n’ roll – whilst maintaining a strong, signature style. His spontaneous delivery and narrative lyrics are at the coal-black heart of it all, instilling the songs – effectively, mini-movies – with a cinematic, hand-crafted quality, and this very much holds true for ‘On The Widow’s Walk’.

“I was floored by Jake’s voice and his lyricism,” recalls Shooter. “It was intimidating. But we had a really good time igniting our inspirations together. Jake is one of the best out there. I’m honoured that I got the chance to make this record come to life with him and his band. They let me into the fold and we made some fine music together. Long live the Jelly Crew!”

The ’Jelly Crew’ in question, in addition to Smith, comprises drummer Matt Lynott and bassist Christopher Hoffee, also responsible for many of the guitar parts. They recorded as live and as first-take as possible, using violin and pedal steel where required.

With an eclectic history to his illustrious name, Shooter simply has no interest in playing it safe; he sides with a diverse selection of talent, and his collaboration with The White Buffalo has produced a special body of work that is stripped and spiritual and sounds just like the artist.

At one point, the idea of a concept album was considered, but Smith didn’t want to leave out quality songs just because they might not fit a specific concept; hence, ‘On The Widow’s Walk’ has water and the ocean as underlying rather than dominant themes, a sense of longing too, something reflected in songs such as ‘Sycamore’, ‘River Of Love And Loss’ and the title track; it’s there in the front cover artwork, too – a portrait of Smith by UK artist Jack Browning.

Other subjects tackled include living for the moment (‘Problem Solution’ / ‘No History’), the soulless march of technology (‘Cursive’), the indiscriminate force of mother nature (‘Faster Than Fire’), plus what happens when the moral compass spins wildly out of control (‘The Rapture’, also lead single and lyric video).

“It’s a twisted, primitive tale of an unrelenting thirst for blood,” explains Smith. “With ‘The Rapture’, I wanted to blur the lines between animal and man, to create a tension of moral restraint and unbridled evil.”

From sinister through to plaintive, the overall feel is of all parts supporting a wider view under the album’s intriguing title, first mentioned by Lynott.

“We were driving through an East Coast seaport town and I asked what the little balconies were on top of the buildings,” recollects Smith. “Matt explained that the wives of the sailors would pace around on the roof-tops longing for their husbands to come home safely. There’s so much romance in that, the Widow’s Walk, plus of course the possibility of disturbing and dramatic things taking place.

“I guess what I’ve tried to do with this new album is to represent a broad range of emotions. There’s dark moments here, more uplifting moments, questioning moments, it’s not just one thing. Also, I like to put some confusion into my songs, which is a very human element, I think.”

‘On The Widow’s Walk’ is a compelling, gimmick-free statement from an artist, now based in Southern California, whose activity between the musical lines has seen his star very much on the rise, playing to a million followers worldwide, achieving over 200 million streams to date, and securing a Top 10 spot in the TV / Film Syncs Chart for 2019.

And Smith will once again be taking his unique vision live; the following shows are on sale for spring 2020, with more to follow:-